It’s starting to feel decidedly autumnal, which means it must be time to tackle the task of getting all the photos I took on my summer holidays off my phone/ camera and on to my computer. For some people this is slightly daunting and so gets put off until the point when your camera can’t take any more pictures because the storage space is full. But it’s really quite simple and if you do it regularly you’ll find you can organise your photos into lovely albums that make it easy to find and show off your best shots to your friends.

Alternatively (or as well) you can use a cloud-based service to store your photos, and these can be set up so that they upload photos automatically from your phone. This means that should the worst happen (a spilt cup of coffee, leaving your laptop on the bus…), you’ve still got your lovely pictures safely stored elsewhere.

Here’s how to do both:

Manually upload your photos using a USB cable. The process for importing and transferring photos from a mobile device basically hasn’t changed for a decade. The process varies slightly between ecosystems and operating systems, but it’s typically a matter of plugging your phone or tablet in to your computer using a USB cable, and clicking the Import button, (or some version thereof). Once imported, you can delete the photos from your phone and free up space to take more.

Here’s how it works on my Mac: plug my phone into the computer with a USB cable and the Photos app (or iPhoto, depending on the age of your computer) opens up (you need to tick the box that says ‘Open Photos for this device’ to make this happen each time)

The app will show all the photos on your phone, separating them into those that are already on your computer and any that are new.
Choose the photos you want to import by clicking on each image, or choose ‘Import new’ to upload all of them. Then click ‘Import selected’ and the process of uploading begins. This could take a few minutes depending on how many pictures you’ve got.

The process will be much the same if you’re using a PC and the Windows Photo app. Once the pictures have been imported, it’s a good idea to organise them into albums, so that you can find them easily later.

Use a cloud-based service to have your photos automatically uploaded as you take them. This is a fantastic way to make sure you never lose any of your photos, even if you drop your phone in the swimming pool. There are hundreds of cloud storage services, and you may already be subscribed to one. If you’ve got an iPhone the chances are you already have an iCloud account and if you’ve got an Android phone, you’ve probably got a Google Drive or Google Photos account. Another

popular and easy to use service is Dropbox, and they all work in much the same way. The key is to make sure that you are signed in to the same account on your phone as you have on your computer, and to turn on the ‘automatic upload’ facility.

I have my photos loading to Dropbox automatically which means that every time I am in a wifi area, any new pictures will be sent to my Dropbox account. To do this, I have the Dropbox app installed on my phone. Then in the settings section of the app (look for the little ‘cog’ icon) go to ‘Camera uploads’ and make sure this is set to ‘On’. Once this is set up, it means that if you delete a photo from your phone, it will still be on your computer, in your Dropbox account – genius! So you can take as many pictures as you like on your holiday and you should never run out of storage space.

Google Drive and iCloud work in a similar way – just go to the settings in the apps and choose the ‘auto-add’ function for Google Drive, or switch ‘Photos’ to ‘on’ for iCloud. For this to free up space on your device, do not check the box next to iCloud Photo Library, but do check ‘Photo Stream’.

Be careful with iCloud  – if you use the relatively new iCloud Photo Library to store your photos, deleting images from your phone or iPad will remove them from the cloud too. You can find more information about how to use iCloud here. And we will talk more about this slightly complicated system another day.

As always, if you have any comments or queries, please get in touch. Until next time… happy snapping!

Last week Apple released a new update to their current ‘Yosemite’ operating system – it’s rather catchily named ‘ten point ten point 3’ or 10.10.3. For those of you who aren’t clear what an operating system does, it’s the software that runs your computer, and every so often the manufacturers send out updates to improve (hopefully) the way you can use your device.

Apart from a few ‘back office’ updates that help with stability and security on your computer, this operating system (OS) update is mostly focused on the Photos application, which in theory replaces iPhoto as the best way for Mac users to organise, edit and share their photos – more on that in a minute. There has also been a lot in the tech press about the addition of around 300 new ’emoji’ characters  which allow you to choose a skin tone for the various smiley face-type icons. To access the emoji, just press the combination of cmd+ctrl+space in any text entry field (i.e. a document or a text, or indeed a blog post). Find the emoji you want to use and click on it to show the variants. Sadly though, as one reader pointed out, there is still no red-head option.

As I mentioned, the major part of this update is the release of Photos. At first glance it won’t look that different from iPhoto, but there are some clever new ways in which Photos now works to synchronise your images across all your devices.

1. Organisation – the new Photos app works in a way that you might be familiar with if you have photos on your iPhone or iPad – the pictures are organised according to the time and location they were taken, to create ‘Moments’. By zooming in or out with one click, you can have a yearly overview of all your photos (as above). You can also view your photos according to the type of image – panorama, photo bursts or even movies – and as before, you can create your own albums easily. 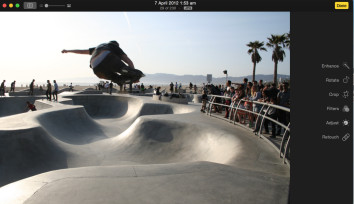 2. Editing – according to Apple, the new app allows more detailed editing than iPhoto did; for most of us, the ‘enhance’ button will be enough to automatically adjust exposure problems and make the colours look better, but if you want to make more specific adjustments you can use the simple sliders for colour, light and black and white, as well as fun filters, cropping, red-eye removal and other retouch options.

3. Sharing – if you want to post the latest baby photos on Facebook or quickly send a picture of your new shoes in a text message, just use the sharing button in the top right of the Photos app. This isn’t really new, but the thing that Apple are most excited about is the iCloud Photo Sharing option, that is linked to …

4. …iCloud Photo Library – this is a new feature from Apple that brilliantly syncs all your pictures across all your iThings. Once you switch on iCloud Photo Library (in Settings), your photos will be uploaded to your iCloud account, and any photo taken on any device will be automatically saved to the library and available to view on all your other Apple devices.

The biggest advantage of this new way of storing photos is that you don’t have to take up precious storage space on your computer, phone or iPad; iCloud Photo Library automatically stores the original, high resolution images in the cloud, and you can access the pictures on your phone or iPad wherever you are.  The downside (inevitably) is that you need to pay for the storage space if your photo library is bigger than the 5GB you get free (I’ve got about 13,000 photos which is around 40MB). You don’t have to switch on this feature – you can store the photos on your computer as before, but of course there is a trade off in terms of being able to access them anywhere.

Here’s my usual health warning – before you update your OS, make sure you have everything on your computer backed up. 99.5 times out of 100 everything will be fine but once in a while, a software update can cause things to go a little haywire, so it’s a good idea to be safe. Once you have completed the update, you’ll find your existing iPhoto library transfers seamlessly across to the new Photos app, and you can start having fun with your pictures again 😃

How many ‘New year, new you’ articles have you seen since January 1st? New year resolutions have mostly gone out of the window by now – I fell off the wagon a week ago. But a quick look at your computer desktop or filing system may persuade you to start a new way of sorting your digital documents, music, movies and photos.

Here are some top tips for taking control of your digital world.

How many pictures of Granny at Christmas do you really need? Or your dog doing something funny in the garden? The reality is we’ve all got too many photos and the prospect of sorting through them to work out which to keep and which to delete is so daunting that few of us bother.

We’ve recently discovered the PhotoSweeper application for Mac, which makes this seemingly huge task much easier and quicker.

PhotoSweeper looks at your iPhoto, Aperture or Adobe Lightroom photo libraries to find either exact duplicate photos or ones that are similar. It has lots of different settings that allow you to choose how it selects the pictures, and how it decides which to keep – for example you can pick partial matching based on the time the photo was taken, or the composition of the pictures. Once you’ve chosen the settings, PhotoSweeper makes a comparison of all the shots you’ve imported, and identifies groups of identical or similar pictures.

You can ask it to mark the one in each group that it ‘thinks’ is the best one, and delete the rest. If you really can’t face deleting them altogether, you can save them to a different folder.

PhotoSweeper is great for times when you’ve taken loads of pictures of the family, in the hope that everyone will be smiling in at least one of them, or when you’ve imported photos from other computers and cameras and you’re not sure whether you already have them in your library.

We spent a couple of hours last week using the app and got rid of almost 1500 photos from our library of 12,000 – saving around 3GB of space. That already makes it worth the £6.99 we paid for it.