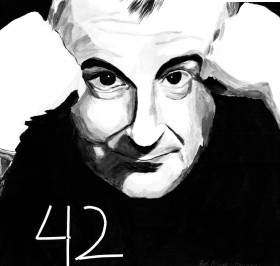 A couple of years before he died, Douglas Adams wrote

“I’ve come up with a set of rules that describe our reactions to technologies:

1. Anything that is in the world when you’re born is just normal

2. Anything that gets invented between then and when you turn thirty-five is incredibly exciting and creative and with any luck you can make a career out of it.

3. Anything invented after you’re thirty-five is against the natural order of things and the beginning of the end of civilisation as we know it until it’s been around for about ten years when it gradually turns out to be alright really.”

This comes from an article Adams wrote for the Sunday Times in 1999. It’s not really about technology – it’s about how set in our ways and resistant to learning new tricks we all become. It’s worth a read: http://bit.ly/1h70MFz

Here’s some of the things that we’ll take for granted in 10 years time:

Cloud computing – all your photos, files and music stored in your own personal place on the Internet;

Constant wifi – constant connectivity to ultra-fast data; (for some it’s the most basic need: http://bit.ly/19NXYo5)

Streaming music and TV – we’ll have screens rather than “television sets” and those huge collections of CDs and DVDs that we spent decades of pocket money on will all be in a box.

These technologies are becoming mainstream now – time to learn some new tricks.

(Thanks to Chris Lewis for the quote.)